The winter months are synonymous with the flu season, stuffy noses, sore throats, and nasal congestion. Yet, it’s possible that your immune system fails you anytime during the year, and you find yourself with cold symptoms. When illness has you feeling down, you may wonder, “Should I still practice yoga while sick? Can I attend yoga class when I have a cold?”

Though we cannot speak on behalf of doctors, some yoga teachers that I know suggest sticking with your yoga practice during times of illness—though your “practice” should differ from when you’re feeling physically well. Asana, especially in gentle forms, is inherently healing and balancing to the body. So are meditation and certain purification and cleansing practices.

If you’re feeling sick, it’s best to stay away from the yoga studio to prevent infecting your fellow yogis. Instead, practice from home. This is especially important if you are coughing and sneezing! If you’re feeling really sick, do not practice asana and instead focus on resting. While you’re sick, it’s especially important to listen to what your body needs, and sometimes the most yogic thing you can do is rest.

How to Practice Yoga When You’re Sick 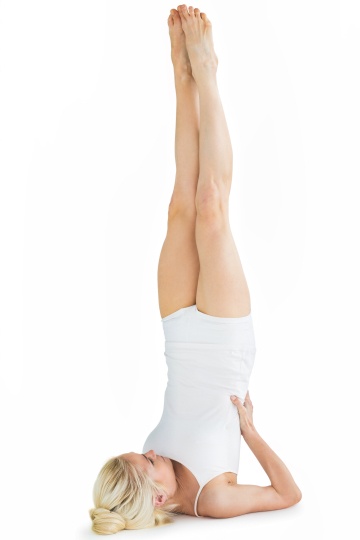 Slow, gentle movements are part of the key to recovery. If you have the energy for it, try a gentle class or restorative practice. If you’re practicing at home, focus on these poses: Child’s pose, Shoulder Stand, Downward Facing Dog, Bridge pose, and seated spinal twists. End your session with a long Corpse pose. Support these poses with blocks, pillows, and blankets so you can hold them with minimal effort. If your nasal passages are mostly open, try practicing several minutes of alternate nostril pranayama. These yoga poses and breathing practices can stimulate lymph fluid, help with blood circulation, open internal organs, oxygenate the body, clear the sinuses, and calm the mind.

I once heard a yogi say she preferred hot yoga power vinyasa classes when she was sick because they heated her body and helped her “purge the virus.” While going to a yoga class might initially seem to make sense, most yogis agree that you have to take it easy when your body is working hard to fight off illness. And if you have a fever, a hot, sweaty class might dehydrate your body and make things worse! If you feel the need to heat the body for cleansing purposes, do so at home instead of going to the studio. Choose less vigorous options like hot showers, warm broths, ginger tea, and vitamin-rich, medicinal foods.

Remember that Yoga is more than Asana

Getting sick might be a perfect opportunity to practice the other limbs of yoga we all too often ignore. In fact, the limb of niyama (which comes before the limb of asana) is divided into five parts, which can and should be practiced while sick. For example, shaucha, or purification, can be done through bathing, eating nourishing, nutritious food, and using a neti pot to cleanse nasal passages. If that’s not enough, consider meditating on the concept of samtosha and use this as an opportunity to make peace with modifying asanas, or choosing a twenty-minute Shavasana for your physical practice. The last niyama, ishvara pranidhana, or devotion, refers to surrendering to a higher intelligence beyond our limited notion of self. Sometimes being sick can be a much-needed reminder of our human-ness. When we see it as such, it can be a humbling gift.

Embrace the Benefits of “Eastern” and “Western” Traditions

It is tempting to think of “Eastern” medicine as holistic and natural, while viewing “Western” medicine as modern and conventional—and to view one as better than the other. As a yoga teacher, I encourage students and loved ones to consider holistic approaches to healthcare, while also recognizing that sometimes, we have to seek the advice of a medical doctor. Be pragmatic on your path to wellness, incorporating the benefits of meditation, yoga, Ayurveda, and other “holistic” practices, while remaining open to modern medicine. The two aren’t always mutually exclusive anyway—partnerships between Eastern and Western health practitioners are increasing, with holistic health methods now frequently utilized in hospital and clinical settings. Consider that while you may treat food choices as medicine and practice restorative yoga at home, it may also be wise to take ibuprofen or acetaminophen to control a fever, or take a decongestant if you’re having trouble breathing during a cold. Remaining open to all forms of healing softens the rift between the Eastern-Western divide, and creates more harmonious spaces in which wellness can flourish.

Whatever form of yoga you choose to practice when you’re feeling under the weather, proceed with kindness and compassion for your ailing body. And just as you would for a pose that feels uncomfortable or unsafe for your body—if it doesn’t feel right, don’t do it. Your mat will always be there tomorrow.

What are your thoughts on practicing yoga when you’re sick? We’d love to hear your comments on how yoga has helped you recover from a cold.

Megan is a wide-eyed student of curiosity and beauty who discovered in the summer of 2010 that this makes her a yogi. She has since used the teachings of yoga to travel both far and near, volunteering with AmeriCorps along the way. She is passionate about empowerment, conversation and connection; these are her Yoga Sutras. In 2012 she graduated from the Vira Bhava Yoga Teacher Training at the Glowing Body Yoga Studio in Knoxville, TN. She also holds a degree in Spanish, and considers language a living meditation with sound and spirit.

3 Paths for Expanding Your Yoga Practice

9 Wonderful Ways To Stay In Love With Yoga

Yoga and the Ethics of Touch: Guidelines for Teachers and Students